A Place of Healing, Centered on the Eucharist 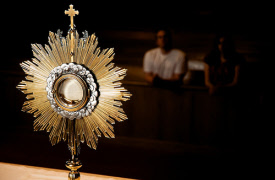 My first introduction to The King’s Men came a little less than three years ago, when a dear friend of mine and fellow missionary, Mike Dill, invited me to come with him to an Into the Wild retreat in Show Low, AZ. That summer ended up being a bad time for me, and so I had to regretfully postpone until the following year. When I finally went, it changed my life! Mark and I kept in touch, and in May of this year, I came on staff with The King’s Men as the Director of Operations and Development and have been working with Mark full-time since.

I was invited to come and attend the November Samson healing retreat in Hammonton, New Jersey. Flying into Philadelphia, the drive was beautiful and serene! This retreat was held at the Discovery House, a Catholic retreat house founded by Monsignor Mike Mannion, nestled in-between commercial blueberry fields and the New Jersey Pine Barrens.

Over the years, I have attended various healing seminars and conferences, but this was my first retreat of this nature. In reflecting on my preparations for the weekend, I identified about 5 areas in my life that were in need of healing and figured that the Lord would likely address these at least in part. His plans were different. On the flight over, I was reading a book on parenting for new ways to guide our three year old, and the Lord clarified a sixth area that I had previously not seen. It was in this that He wanted to heal me.

Over the four-day weekend, two aspects stood out as particularly powerful. The entire retreat was centered on the Eucharist. Fr. Jim Hutchins celebrated daily Mass, and in the chapel was an almost perpetual cycle of Eucharistic adoration. Men were assigned a couple hours each to pray and be with the Lord, but the opportunity was made available for us to stay as long as desired, even to the point of missing other activities. Over the weekend, I was able to spend close to 8 hours there with Jesus. I felt close to Him, and it was there in that deep encounter that He started unraveling this wound and clarifying it for me.

I am also deeply grateful to the brotherhood that developed. It was an immense opportunity of healing and bonding. We shared our sorrows and trials with one another, which brought light into very dark and hidden places for many. It was from this radical vulnerability that we found support and encouragement in each other. Support to bear the trials in humility and virtue, and encouragement to correct faults of our own, and to seek above all holiness. It was in experiencing the vulnerability of the others that we could take the risk to show our own. The strict confidentiality of the weekend provided the groundwork to make this possible.

Christ didn’t heal the wound entirely, but He revealed it, and is asking me to take the time to prayerfully work on it with His grace. I am tremendously grateful to know that this wound exists, and that He is here with me as He heals it. This knowledge has brought me great peace, and I am truly grateful for this retreat, and for the men that shared their wounds and offered their support.

“Come to me, all who labor and are heavy laden, and I will give you rest. Take my yoke upon you and learn from me; for I am gentle and lowly in heart, and you will find rest for your souls. For my yoke is easy, and my burden light.” Matthew 11:28-30